in case you want to watch the movie online, go to www.thewhitemaze.com

How it all started….

After our intense weeks on Onekotan, we were happy to be sitting on the plane home. But, no matter how tired, how fed up with hustles you are, if the right object appears…

It maybe is the same as when you meet the woman of your dreams..

Anyway, we were sitting in the plane, half asleep, looking out of the window down to… to what? Siberia, sure, Siberia is everything from north eastern russia to almost moscow :). but, should not Siberia mostly be flat Tundra and Taiga? Since the Pilot should know the way to Moscow, what we were starring at must be the north eastern part of Siberia. For an hour now we were flying over mountains, mountains, mountains. It looks like a huge “White Maze”. And it looked extraordinary beautiful. We started joking, let´s go there for skiing next time, ha ha ha.

Nine months later, Somewhere between the settlements UST NERA and SASYR. Hauni, me and Johannes, our filmer, are digging. Digging  our bus out of the snow. We are not laughing anymore…

We are on the road now for 36 hours. Road means, we drive, because there is no road, just frozen earth with snow on it and if your vehicle is good enough you can drive. And if your driver is a mix of Sebastien Loeb and Superman. It has -55 degrees Celsius. Next settlement, 150km. And we got stuck. What we are doing here? We had the great idea to ski the mountains we spotted ;). But, when we started investigating, we soon realized, those mountains are far, far, far away. The mountain range is called Cherskiy Range. It´s highest Peak is “Gora Pobeda” altitude 3003m or 3147m, depending on which literature you take for serious. Only few people have been standing on it. Nobody ever skied there. It is a very cold part of the world. The coldest habitated places are in this area with records of -68 Celsius. It is a few kilometers south of polar circle.

We are trying to get to a family of nomads who live about 60km next to this mountain range. They are the only people who could give us support to get into the mountains. Sometimes it is better, that you don´t know everything about problems and risks that come up when you set a goal….

Our driver Pasha tells us, we can not get stuck, because then… The good thing, when you dig for an hour, even in temperatures below -50C you start sweating. Why are we doing shit like this? I could be back home having fun skiing in the alps and sitting in a warm hut every evening. Instead we are somewhere 8000km away in Siberia, the country your grand parents told you of, that grand uncle Johann has been there in the Gulag for six years. Siberia is everything but the place to be, maybe we should not permanently ignore when people warn us! But Hauni and me already have switched into our robot mode. Don´t be pessimistic, just go on and on and on until you got through it. And don´t even think of not getting through it! But this time we really are a bit desperated. The hard facts! Ust Nera, 150km away, Sasyr 150 away. No road, just snow and ice. We have a 4wd UAZ bus that is stuck in 60cm of superdry snow, storms blowing with 60km/hour. temperature already mentioned.  we did not sleep for the past 36hours. We have no idea if it is even possible to ski in this mountains. We already spent a lot of money to even get here, but everything looks like this was just a really stupid idea….

More to come soon, I have to get out into summer now, started freezing when reminding of that ;) 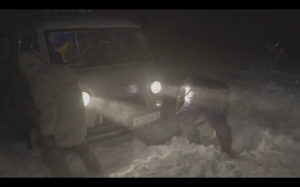 2 thoughts on “THE WHITE MAZE”